Heroes in the Home

AMDEA > Our Purpose > Campaigns > Heroes in the Home

Heroes in the Home

This initiative helps build awareness of the critical role that appliances play in a daily lives at home. The campaign, created in 2020, recognises that, more than ever, householders are spending more time at home, at work and at leisure.

Domestic Appliances help make our daily lives easier and more productive, whether they are helping to keep the home clean, support personal hygiene, keep food and medicines safe and fresh or help with food preparation and cooking, more than ever we all rely upon our household appliances every day.

The AMDEA ‘Heroes’ campaign has 2 parts.

In Part One we ran a campaign, linked to a survey of UK householder attitudes to home cleaning. The campaign, used a light hearted survey to discover the attitudes of Brits, up and down the UK, on household chores and their relative importance.

Our survey found that almost a fifth of house-proud Brits refuse to have sex unless their bedroom is spotless.

The nationwide study found that 18 percent of British adults are unable to get down and dirty with their other half if their bedroom is not clean.

In fact, 19 percent have actually halted an intimate moment with their partner in order to tidy a room, while three in 10 (30 percent) admit they can never properly relax and enjoy themselves during sex if they are surrounded by mess.

23 percent of Brits admit they insist on folding and putting away all discarded clothes before they get between the sheets with their partner.

While 37 percent claim that dirty sheets are the biggest turn off during a sexual encounter.

And 21 percent of us admit that if they discovered we were dating someone who had a messy house, it would instantly put us off taking things further. The study also found that two in five (40  percent) of British adults said they simply cannot relax if their house is messy, with 27 percent admitting they often do housework late into the night.

29 percent of the nation will prioritise housework over chilling out, 17 percent admit they put cleaning before seeing their mates, and more than one in 10 (11 percent) confess they won’t spend time with their kids until their house is spick and span.

While a fifth (20 percent) of Brits have a strict weekly cleaning regime, 21 percent will ‘clean as they go’ – only tidying when things start to look messy.

And 8 percent admit to spending as little time doing chores around the house as possible.

The study also found that the average Brit every week spends three hours hoovering, four hours doing laundry, and four hours loading and unloading the dishwasher. Four in 10 (40 percent) of Brits said they literally could not live without their home appliances, while more than one in twenty (7 percent) confessed they would rather ditch their partner than their dishwasher.

When it comes to the appliances we love and rely on the most, at number one was the washing machine (60 percent), followed by the fridge (58 percent), and the humble kettle (56 percent).

The data also revealed that 27 percent of those surveyed admitted they were always keen to ‘keep up appearances’, with a whopping 70 percent confessing they have felt ashamed about the state of their home when unexpected guests arrived.

Yet a quarter (25 percent) of us claim to feel secretly furious when house guests make a mess and don’t clean up after themselves.

The study also found that 18 percent of the nation said that lockdown made them realise how untidy their houses were, with almost a quarter (24 percent) claiming that during lockdown, they had cleaned their homes more than ever before.

Said Paul Hide, CEO of AMDEA: “We’re not surprised beautiful homes are top of people’s agendas right now. We have all spent a lot more time at home this year than expected, resulting in more pressure to make sure our homes meet our needs. This, coupled with the fact that we are all less likely to take an overseas holiday, means people are investing more in their homes, kitchens, and appliances.

“Whether that is creating a stunning interior, one that we can show off in the background of a work video call, or simply creating a home that functions well, making household chores easier is at the top of Brits’ checklist. A washing machine that runs efficiently and quietly or a vacuum cleaner that makes light work of cleaning, households want high tech appliances that save time, energy, and money. It’s not just about how a home looks, it’s got to work well too, and we’re committed to ensuring people get the best out of their home appliances through best in class innovation and technology.”

The campaign gained feature coverage in a wide range of national and regional press titles. The campaign was backed-up with Influence content promoted on AMDEA’s Twitter and Instagram accounts.

For Phase 2, the narrative changes away from cleaning to focus on food preparation and home cooking, using a range of social media influencers to share their stories of how appliances are enhancing their lives at home.

An example of our Influencers posts: 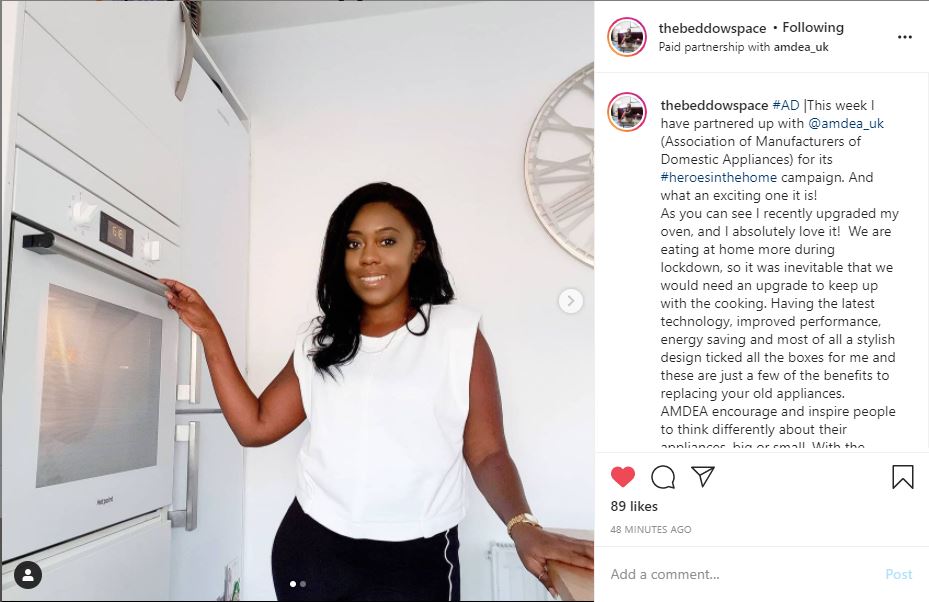 #AD |This week I have partnered up with @amdea_uk (Association of Manufacturers of Domestic Appliances) for its #heroesinthehome campaign. And what an exciting one it is!
As you can see, I recently upgraded my oven, and I absolutely love it!  We are eating at home more during lockdown, so it was inevitable that we would need an upgrade to keep up with the cooking. Having the latest technology, improved performance, energy saving and most of all a stylish design ticked all the boxes for me and these are just a few of the benefits to replacing your old appliances.
AMDEA encourage and inspire people to think differently about their appliances, big or small. With the current restrictions and spending more time at home, why not treat your kitchen to an upgrade or an additional appliance and make your life in the kitchen easier and more enjoyable.